It occurred to me while reading through the Buddipole information for the Triple ratio Switch Balun (TRSB) that I should be able to make a 20m vertical with a rigid loaded counterpoise.

This antenna configuration would
Modeling

I started with some simple modeling in 4NEC2. 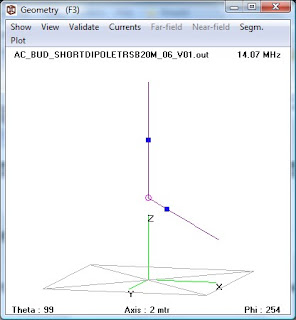 The vertical arm is constructed with 3 dipole arms, 1 red coil, and 1 standard whip. Using more than 1 dipole arm helps make the antenna longer and more effective. The loaded counterpoise is built with a single dipole arm, a black coil and a standard whip. 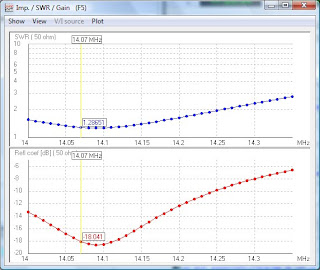 The antenna is brought to resonance at the frequency 14.1MHz which is what I wanted with the following parameters and settings

Vertical
Counterpoise
In 4NEC2 I first assumed the red coil had an inductance of 28.2uH for all 42 turns. This is the value I have used in the past. However with this value, resonance was predicted at only 12MHz. Testing the antenna in the backyard confirmed that the antenna does resonate at 14.1MHz. I temporally centred the model at 14.1MHz by scaling the full coil inductance to 69% of the 28.2uH. 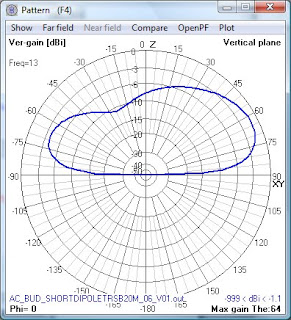 The predicted antenna pattern is as expected for a vertical w/ 1 counterpoise.

Putting it all to use.

Nearby to the city of Ottawa, is a federal park with some breathtaking lookouts. For a Ham operator this looks like very nice spots for an antenna, high up over the surrounding land. 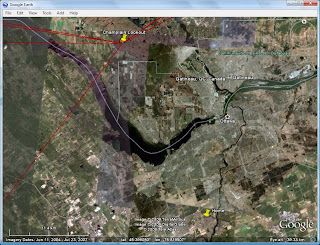 The setup was simple and compact, 2 50AH Gelcells, IC7000, Laptop and the Buddipole 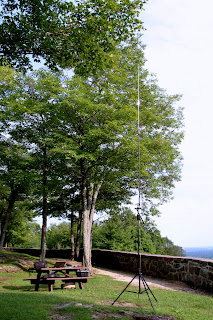 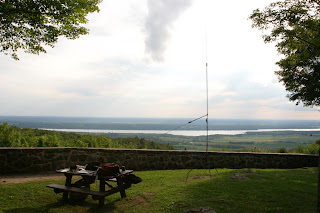 The above 2 pictures show the "picnic table shack" and the vertical. The counterpoise made with the standard whip, coil and arm is raised above the ground and this allows the antenna to be "pointed" and also there is no pesky wire counterpoise to string out.

There was 070 PSK contest going on and there was plenty to listen to. A big plus of this location is the excellent s1 noise level. Many US stations were on the air as expected but notable and very easily copied stations were from Uruguay, Brazil, Argentina, and a good selection of European stations including, Spain, France, England, and some Russian stations.

Thanks to all who helped make this an interesting afternoon. I had some difficulties with the 7000 running a bit hot due to the hot sun. Also, at times there were a few stations who were answering my calls at the same time and I did my best to unravel these situations. 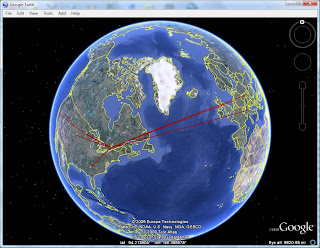 Thanks to IK4JQS and HA6ZB for the 6000km QSOs. and thanks for stopping by.

It was a nice interesting QSO. I hope to see you again on my screen. Al the best from The Netherlands. 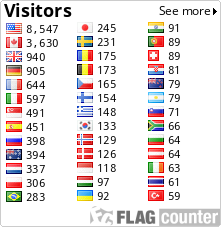